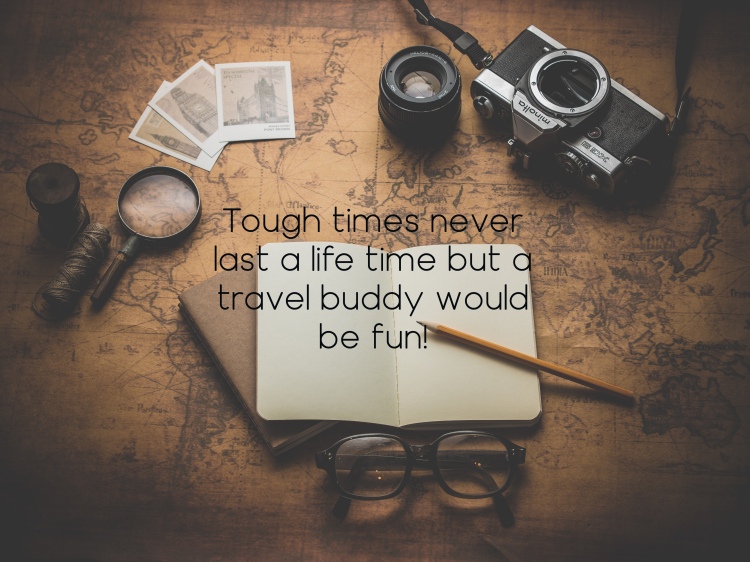 Do you want to travel, but not want to go alone? Does being in a big city or a different country make you feel nervous or even lonely sometimes?

It’s okay to feel that way if you want to go somewhere. Just ask a family member or a friend to go with you. If you are from a writers group or a reading club you can ask one of them and see what works for both of you.

If you found someone or a couple of friends that you think might be interested you all can visit the coffee shop or hang out at the library and talk about where you want to go and visit. Talk budget and what you can afford. If you talk about a certain place or country you want to go, but can’t afford it, it’s okay, don’t be upset and think it’s over because it’s not. Talk about a different location closer to home and how you want to travel there. A bus, a train or drive yourself?

I personally think traveling with friends is more fun, then by yourself because you have people to talk to and to hang out with. But most of us rather just go alone. I’d rather go with a group of friends or other authors, but if I couldn’t find anybody that would want to go with me to book events or book fairs then I would hang out with a group of people that is called a tourist. I would hang around them if they didn’t mind it.

If you are traveling by yourself and you need things to do with your travel buddies, make a list before you even leave. You don’t want to end up in a different country across the world and not know where you are or don’t know where to go? If I were by myself I would print a map off or buy the map then highlight all the roads I’d take on a bus or a train. And I would also write down all the addresses where I would be staying so I wouldn’t get lost and I could GPS it.

Or If you’re with someone or with a group of your friends, you can have them do the mapping and drive together.

Ashley Lovell is the author of The Wish & Awakened Evil. She lives in her apartment with her two cats (Spook and Batman.) She started to write in the summer of 2005. Throughout her writing career, she has written song lyrics, poems, short stories, and novel series. She joined the Marion County Writers Workshop in 2010. She was in the top 10 in The Write Place book contest. And also, has several short stories featured in charity anthologies. When Ashley was growing up, she lived out in the country surrounded by cows, chickens, cats, five dogs, corn fields, dirt roads, and a patch of woods behind the house. She loves to drink French Vanilla coffee in the mornings when she writes. She is also a supporter of black cats and believes they are good luck. She loves to write creepy stories in the dark. You can find Ashley at Facebook, Twitter, Pinterest, ​and Instagram to see updates and news on her work. View more posts